Let me start by saying that Fear the Waking Dead is one of the best-worst experiences I have been involved in. I say that because the result was amazing, but the road to get there was anything but easy.

Dez and I came up with the concept of Fear in 2015 to help out some friends and people we worked with. Because of a horror of a human being named Duvol Dryden, they almost lost everything. The event was created to help them weather the storm.

Then, it went well, we won awards, and the marketing was a feather in my cap. We still weren’t sure what we had, so we decided to take it more seriously in 2016. Dez and I slept, ate, and bled Fear this year. We now know what we have.

After we sold out every date again, we realized that there is something truly remarkable about this creation. The reason for the success is because we all work as a team to ensure that people get an experience they can’t find elsewhere. Sure, there was a copycat event this year, but Dez and I put our heart and soul into this, so there’s nothing that comes close.

Before I get into the awesome story for Fear, let’s talk the problems. Last year, the weather was beautiful, and we were starting earlier so we figured that surely we would be okay. Nah. Mother Nature is a cruel zombie hating woman that would not make our lives easy. 24 hours before an event it was hailing outside and none of us could last in the wind longer than just a few minutes. That which had been planned for months, had to moved inside. What did that mean for us? Well, we had to change everything; the games, the premise, the way the zombies would act, the storyline … pretty much everything.

I remember being exhausted already, sitting in a plastic chair on the main floor of Adrenaline Adventures with Dez and Jason Rohs (the owner of Adrenaline Adventures) debating what to do. We went back and forth, argued, debated, and finally settled on moving everything inside. We were careful to keep all other elements of the promotion similar though, so we weren’t giving an experience not advertised. The three of us knew this would get messy; the blood, the damage, the unpredictable nature of fear … and boy, did it ever get messy.

Here’s a pic of the space as we loaded in, after setup, after the final show, and once it was cleaned up. 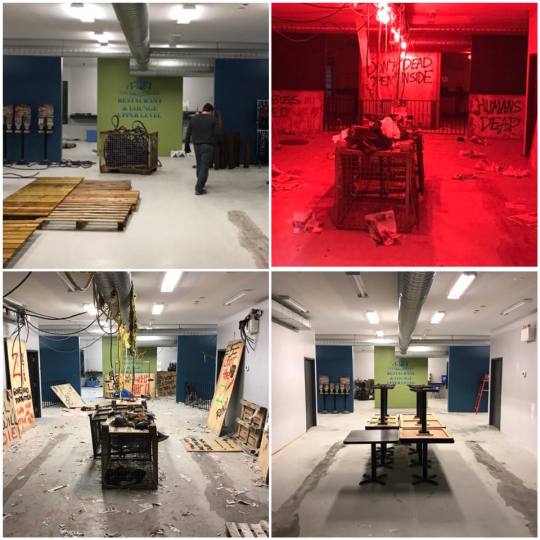 We’re lucky we all made the choice to go inside because had we not, 7 of 12 nights would have been cancelled. Sure, it was beautiful during the week, but come Friday and showtime, rain, snow, wind, and cold greeted us. Everyone would have lost out had we stayed outside. Patrons wouldn’t enjoy themselves as much. Charities would be out money. Dez and I would have lost our shirts. The production would have failed.

We had some complaints from people about being inside, but those people just weren’t thinking about the event as a whole. It’s easy to complain when you’re thinking of your 20 - 45 minutes, but when you consider all that goes into this event … well, you start to see the problem with being outside in the weather we were getting.

First, there was already a plague called the flu going around. We lost half of our people to it. They’re probably roaming the streets looking for flesh right now. Nearly everyone was sick at some point, and that’s with us being inside. For all those involved, the production started at 3pm with makeup and rehearsals. Then at 7pm we started the show. For 5 hours we presented the apocalypse each night. Then there was set down, and clean up. All told, Dez and I worked from about 10am - 2am each day of the event. Couple that with our regular, non-rotting lives and jobs, and we were pulling 100 hour work weeks.

When you consider the weather and all that goes into a production with hundreds of people, thousands of patrons, and elaborate production, you start to see why we couldn’t stand outside in a freezing field each night. Not to mention the rain would have ruined the makeup.

One of the only complaints we had once people arrived was about how late some games were started. Unfortunately, this could not be avoided. We can’t start the next game when people are locking themselves in bathroom stalls, having panic attacks, or frozen in place (not willing to move). There were injuries. Hell, personally I dislocated a finger, busted a toe, and popped my shoulder. I’ve got bruises from head to toe, and a pretty mean limp. It’s an unpredictable environment. We stayed on time as best we could given the circumstances.

Oh, and as a side note and message for the future of Fear events, if you drink a lot before going into one of our games, you won’t get in. Control yourselves.

Now, don’t get me wrong. We had a blast. Despite all the injuries, the few that couldn’t be scared, and the plague that wiped out a lot of our people, we had the time of our lives scaring the city.

Fear is an interesting emotion. I’ve found from being in the thick of it for a month that there are 3 kinds of fear:

Those that scream and cry.

Those that immediately react with flight, fight, or freeze.Those that laugh nervously at the idea of fear.

Then there’s the people you just can’t scare. They’re the people that go into something like this looking to ruin it for themselves, and unfortunately everyone else. They can’t suspend disbelief long enough to have some fun with the idea of a zombie apocalypse. I feel bad for these people. I don’t know if they’re just trying to be tough, or are miserable, but they need to smoke some weed and relax a bit. Life is more fun when you can let go.

I know I can speak for everyone when I say, thank you Winnipeg. 99% of the groups that came through were a riot for us. Screams, crying, panic, and man did I love to watch women in full makeup apply the blood to their faces. A good time was had by all.

When the smoked cleared, we spent $1000 more than planned on duck tape (YES, just duck tape alone cost us over $1000), gallons upon gallons of blood had to be cleaned, holes in walls had to be patched, bodies had to heal, and we as a group have to live with the screams of Winnipeg engrained in our brains. That last part we enjoy though. We upped the ante from last year, so you can just imagine what we have planned for next year. It’ll just keep getting increasingly real.

Lastly, I’d like to talk about the people behind the scenes. It takes crazy dedication to do all of this. We’re all insane, love to geek out, and need our heads examined (but in the best of ways). It takes heart to sign up, and a good soul to see it through. We raised money for charity, collected pounds upon pounds of food for Winnipeg Harvest, and created another Z fam.

So, thank you, on behalf of Dez and myself, to all of you that made this what it was. You truly are good people, and you have earned yourself some serious karma points.

Special shout out to Dez, my mom, her parents, and my dad.

Now, I have prepared a poem …

Rick and his group, They started a trend. Zombies are all the rage, Even for guys that sacrificed their girlfriend.

We heard screams of fear, Smelt something funny. People cried, And we got a bit gunnie.

Hundreds of Z’s, And thousands of people. Grown men lost their shit, In our holiest of steeples.

So much blood, Mixed with the tears of a city. Souls were smashed, lives were lost, From us, there is no pity.

Zombies, zombies, Everywhere. They’re around all the corners, And smelling your hair.

Until next year, Winnipeg, When the gore is amped up. Just know we’re coming for you, And we plan on fucking shit up. :)